Upon completing his BA degree in biotechnological engineering 30-year-old Pini Ya'ish of Be'er Sheva started looking for a company where he'd be able to make a contribution and have an impact. During the course of his studies he gained three and a half years of experience as a QA person at a large drug factory. At the end of this period he sought a job at a leading company and through the Jobnet site, six months ago he joined Omrix as a QA engineer.

"During my studies I specialized in biotech, which includes a broad spectrum of topics from the life sciences, precision sciences and engineering. At the same time I was working at a drug factory called Kamada, and when I finished my degree I started looking for work in the Central Region, where most of the biotech industry is concentrated."

Where did you send your resume to?
"Most of the companies in the Southern Region are involved in the chemical industry, so I decided to send out my resume in the Central Region where there's a wider range of opportunities in biotech. Biotech has been developing and leaping forward in recent years, which I believe will improve our lives in the field of medical equipment, drugs and information systems." 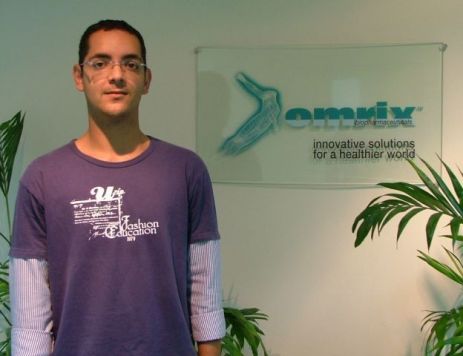 What kind of jobs did you apply for?
"I sent out my resume liberally via Internet for a job as a biotech engineer or a process engineer. I also looked for a job in QA, especially at drug companies, since I had acquired a lot of experience in the field of pharmaceuticals at my prior job."

How was the response from the companies?
"After a while a lot of companies got back to me, including a strong response in the Central Region. On the other hand in the South, as expected, I received replies primarily from chemical companies. I decided not to compromise on the profession, but to focus on biotech, which is what interests me. For me the biotech production process is a complex, interesting and challenging process that demands creativity and differs from the chemical industry. I wound up conducting advanced negotiations with two companies and eventually chose Omrix."

Why did you chose Omrix?
"I was looking for a stable place where I'd be able to develop myself as much as possible and I was looking toward the future. Omrix is a fascinating company in terms of its field of enterprise and its unique products are perceived as lifesaving. Omrix also has a lot of divisions, which will allow me to develop in the future, such as an R&D division, which is where I'm aiming. I also realized it was a new, autonomous job that I'd be able to construct in my own way, contributing my knowledge and experience."

Dafna Eiron, human resources clerk, on Omrix:
"Omrix is a multinational biotech firm and one of the leading companies of its kind in Israel. Founded in 1995 the company specializes in developing and manufacturing advanced biotech products using human plasma. The company has 250 employees in Israel at a number of sites: the R&D site at the Science Park in Ness Tziona, the manufacturing plant at the Tel Hashomer Medical Center facility and an additional site under construction at Har Hachotzvim in Jerusalem. The company has offices in the US, Europe and Israel. We market our drugs at hospitals, operating rooms and healthcare funds. Omrix has undergone some of the most stringent quality inspections conducted in Israel and internationally in order to sell its products and it works in cooperation with Johnson & Johnson in distribution and development."

What products does the company manufacture?
"Omrix has two groups of products:
1. Biosurgical Products – A product group for surgical care used to stop bleeding and for other surgical applications. Biological glue Quixil, the company's flagship product, which substantially curtails blood loss during surgery and shortens recovery time.
2. Immunotherapy Products – A group of products that contains a concentrate of antibodies designed to treat infectious diseases and to treat the body's immune system."

How does the Jobnet site provide for your recruiting needs?
"Jobnet has always been the website on which we placed our job notices. I've been in the recruiting field for ten years and at Omrix for two years, and I've always known the site as an efficient tool for recruiting candidates. In addition to the full control I have over the ads posted on the site, it also offers us additional exposure, such as the Guest Forum, which was a really fun and interesting experience."

How do you conduct the recruitment process for QA engineers, which is a new position at your company?
"We spent a long time looking for the right candidate for the job of QA engineer. It's a vital position in the system and requires having the right experience and education for the job. Compromising on the caliber of the job candidate was not an option. We're very pleased with Pini. In addition to the positive atmosphere he creates around him, his professionalism has proven itself."

Pini, how did your integration go?
"I showed up sick on the first day of work and thanks to the way I was treated I felt at ease. Since the job was new, there was nobody to break me in. My immediate supervisor gave me a tour of all of the divisions and introduced me to all of the various figures I now work with. Afterwards I received a long list of regulations to read and study on my own. I came with a hunger for the job, so a lot of the learning process and gaining familiarity with the work and manufacturing processes at the factory happened on the job."

Dafna, how does the job of the QA worker at Omrix differ from a tester at high-tech companies?
"At high-tech companies the job of the QA person means testing software. The worker has to locate flaws in the system and notify the development staff. A QA worker at a pharmaceutical company is perceived as an entity who oversees the work to ensure it's being conducted properly and at high levels of quality based on GMP [Good Manufacturing Practice] guidelines, which are widely accepted in the pharmaceutical industry and which we follow in development and manufacture. A QA person at Omrix has a lot of importance and impact since he's in charge of overseeing the entire production process and pointing out flaws and/or problems in real time."

As a "new supervisor" entering the company did you encounter problems with your integration?
"At first it was unpleasant because as part of my job I had to supervise various maintenance and engineering tasks that go with the production process, and point out to the workers problems in their work if necessary. Also, the department I work with is made up of a veteran staff that operated independently before my arrival. After a few weeks, when they came to realize how crucial my job is as a 'supervisor for positive goals' and they got to know me personally, I became welcome among the employees. I did my job professionally and avoided entering people's personal affairs."

What kind of a company is Omrix in terms of its character and the atmosphere there?
"The atmosphere here is warm and homey. The managers are very supportive and encourage the employees. There's an open-door policy with management, the interpersonal communication is good and I can turn to people and consult with them at any time. I'm very pleased I came here and plan to be at the company for many years."

Now that six months have elapsed, what kind of influence do you have at the company through your work?
"Today the employees in the departments I work with – maintenance, engineering and the lab – know that I'm the one to go to when they want to change or streamline a phase of the production process. They also recognize the added value of my task, because in order for the production process to run smoothly there has to be oversight on a day-to-day basis."

Do you feel Omrix was the right match for you?
"Definitely. First of all the people around me are very professional so I learn from them and feel I'm improving my abilities from day to day. Secondly, Omrix is a company where every worker counts. Individuals don't get swallowed up in the system. Every worker has an opportunity to show initiative by improving and streamlining processes. My managers give me a lot of confidence by expressing their faith in me and relying on me. There's also a feeling of constant encouragement to learn and delve more deeply, in order to carry out my job as best I can for the company."

Do you have any advice you'd like to offer jobseekers?
"I believe you have to go with your dream and aspirations. The main thing is not to give up, even if the job-search process takes time. It was three months from the moment I started looking for work until I got hired at Omrix, and in the end I found the right job for me."