After four and a half years at a biotech company Alon Lamensdorf, who has a bachelor’s degree in electronics and electrical engineering, decided to give up his high-ranking job and look for a new technical challenge. Five months later Alon, 35, is now taking part in a major project at Orad Group as a systems engineer, a position he found through the Jobnet site. While still in the army he acquired experience as a systems engineer in the Technology Reserve while serving in a unit involved in developing the Merkava tank. After his discharge Alon continued working as a hardware development engineer at a communications company.

“Before I came to Orad I worked at a para-clinical startup company doing clinical feasibility studies of medical equipment and drug development. In my job I was exposed to the world of biology and medicine and took part in experiments aimed at saving lives.”

Then why did you decide to leave? You’d reached a high-level position and were dealing with a fascinating contents world.
“My previous job as the company’s operations manager included many areas of responsibility and I came in contact with various fields of medicine. Still, I felt the engineering side was lacking. My foundation is as a technician. As an operations manager I was more involved in management and operations, and less on the level of hardware components. I reached a point where I had reached a dead end at the company, so I decided to quit. I started looking for a challenging job with a future.” 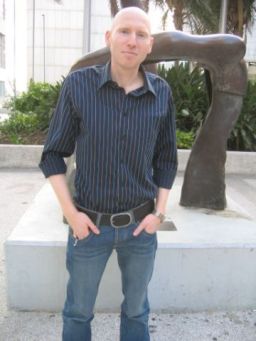 Alon Lamensdorf at the Diamond Exchange

How did you conduct your search?
“My engineering friends gave me positive feedback regarding the Jobnet site. I located positions by doing a search for the field of engineering systems and I submitted my resume for managerial jobs in engineering. A short time after sending out a bunch of resumes I received a large response from the companies. I went to several interviews, including one at Orad for a job as a systems engineer. The entire process took about three months.”

That’s a relatively long time.
“I allowed myself to be picky and look for a job that met my expectations. Also, with a wealth of experience and a strong background in technical fields, I was a leading candidate for a number of jobs, some in security and some in the public sphere, that involved long hiring processes including a lot of screening, tests and even security clearances.”

How was the recruitment process conducted at Orad?
“The initial interview at Orad was conducted by the project manager, who I’d been called in to see. The interaction between us was excellent and the conversation flowed. I immediately saw this was a serious, highly professional company. After the interview I was summoned for a follow-up interview with the division manager, and eventually I went to an interview with the company’s engineering director, Rami Zarchi, who now serves as my direct supervisor. During the interview he told me about the projects, their uniqueness, and about the company’s clients around the world. In addition to professional aspects related to the fascinating project, I got the impression he was a great guy.”

Did you have reservations?
“Besides Orad, at the same time I was at an advanced stage with two other organizations. I received an offer for a job as project manager for a governmental body and as a systems manager at another governmental body. The considerations that guided me most of all in choosing the right job were related primarily to professional issues and what the job entailed. I reached the final phase at each of the companies.”

So why did you wind up choosing Orad over the other two companies?
“Since I didn’t know anybody at the company I sought the advice of some of my colleagues who are now in senior positions. My first exposure to Orad was seeing the company logo at intersections around the country, since it develops, supplies and maintains traffic light and traffic control systems. My friends said Orad had much to recommend itself. Also, immediately after my conversation with Rami and his description of the interesting project, I was sure I wanted to go with Orad.”

What project are you taking part in?
“For the past five months I’ve been participating in a strategic project Orad is executing at the Diamond Exchange. The goal of the project, which is at the world vanguard in the technology it’s implementing, is essentially assimilating a complex entry and security system. The assimilation process is very involved and includes integrating a broad range of fields. The project is being accompanied by a team of Orad employees working in full cooperation. We’re in charge of assimilating the system as well as the configuration process, and finding solutions to ensure the client is satisfied.”

As an outsourcing worker, do you feel like a part of Orad?
“Definitely. I feel I represent Orad. In the work we do as a team I receive full professional support on a regular basis from the field project manager as well as the senior managers at Orad.”

How did your first day at the company go?
“The integration process was quick and fabulous. I was given personal attention by Inbal Keidar, the human resources manager, and everybody welcomed me to the job. I really felt like I was becoming part of a family. Orad doesn’t have bureaucracy. In fact, the management embraces every new employee who enters the company and tries to meet his needs. Taking up the post took a few days because I had to undergo a security clearance at the Exchange. After getting my clearance I dove into the project headlong.”

Inbal Keidar, human resources manager, talks about Orad’s fields of operations:
“The Orad Group, which was founded in 1971, is made up of several companies that are leaders in their respective fields and work in cooperation to form a rich, collaborative pool of talent and expertise for the sake of its clients. The group has over 600 trained employees, including 250 engineers and technicians, and provides professional personnel in the fields of security, fire safety and traffic, parking and communications management.”

How has the Jobnet site contributed to your recruitment procedure?
“Orad has been collaborating with Jobnet for over three years. Most Orad positions are hard to fill, but we recruit all year and receive a quick response from professional candidates as a result of our Jobnet ads.”

Alon, how would you describe Orad in terms of the atmosphere and the people?
“The people here are very high caliber, both in terms of their character and their technological abilities. In addition to their professionalism, Orad employees are decent people first and foremost. It’s fun to come in to work in the morning, to talk to them and work with them. Another element is the high level of professionalism. I came from a different contents world, but with a rich background in engineering, and I still feel I’m being exposed to new areas, and for me every day is a new learning experience.”

Do you see yourself advancing and working at Orad in the long term?
“I definitely see a future for myself at Orad and am very pleased all around. My aim is to advance in the next phase to the post of product manager. Also, I feel I’m making a real contribution and through my job I’m really getting something done. I’m able to have a significant impact and my work touches on many fields. For me the project is like a fetus that gradually forms until it reaches its finished state. Orad is in a process of major expansion. Many projects come in from clients around the world, so there’s definitely room to develop and advance.”

What advice can you offer jobseekers?
“First of all, believe in yourself and come to job interviews with confidence. It’s also a good idea to prepare before the job interview, both professionally, in terms of the position you’re applying for, and the company where you’re going to be interviewed. In general you have to run an intelligent job search based on the state of the market and logical considerations. It’s also important to be practical and to understand that usually there are no shortcuts. Most important of all is not to give up!”