The following article relates the success stories of two Dan & Bradstreet employees, Lior Gera, 35, a customer portfolio manager with a master’s degree in communications and journalism, and Ariel Shunami, 37, a QA engineer with a bachelor’s degree in biology. Both of them found their jobs at D & B eight months ago through the Jobnet site.

Dan & Bradstreet is a leading business information firm. For 160 years the company has provided business, credit and marketing information, first in the US and then in 230 other countries. Its international setup places reliable, available information on over 120 million companies at the disposal of businessmen everywhere. D & B has been a part of the Israeli economy since 1961 and specializes in gathering and analyzing information on business and companies in Israel. The in-depth information and the range of products that D & B provides are a strong basis for reaching the right business decisions. The company has two branches – in Givatayim and in Nesher.

Shlomit Carmeli, human resources manager at D & B, on the company:
“Dan & Bradstreet is a leading company in Israel and around the world in the field of business information. In Israel the company has 160 employees working at a variety of jobs: economists, data collectors, software engineers, algorithm experts, salespeople and customer service representatives. The professional atmosphere our employees are exposed to, from the lowest level employee to the top executives, the familiarity with leading figures and processes in the Israeli and world markets allow employees to grow and develop.”

How does collaboration with Jobnet contribute to your recruitment process?
“From the very start we have worked with Jobnet, which we consider one of our main sources of recruitment. Last year, following a change in the recruiting method at the company, we substantially increased the percentage of jobs advertised on the site. Our sales grew significantly, primarily through recruitment sites on the Internet, the strongest of which is Jobnet.” 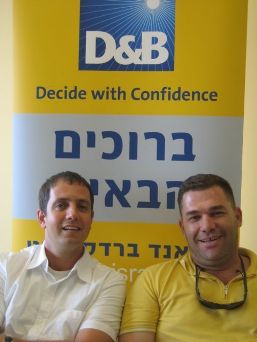 Lior Gera’s success story
Lior Gera, 35, who is married and has a daughter, has been a customer portfolio manager at Dan & Bradstreet for the past eight months. After completing his bachelor’s degree in political science and general history at the Hebrew University, he opted to continue studying toward a master’s degree in communications and journalism. He says his studies served as an enrichment program for the profession he chose to specialize in – sales.

“Before I started working at Dan & Bradstreet I worked at a Leumi Card subsidiary called Leumi Check, where I was among the personnel who set up the sales system. I love sales and all it involves, especially the constant interaction with people and accompanying the entire sales process. After about two years I decided to leave.”

Why did you decide to leave?
“My area of work, which including clearing and discounting checks, was relatively limited and a bit routine. I felt I had come to a dead end professionally so I decided to expand or change the content world with which I came into contact.”

So just what was it you were looking for?
“When I decided to quit I knew exactly which companies I was interested in and I sent them resumes. I chose two organizations, one of which was Dan & Bradstreet and the second was an international shipping company. I had gotten to know Dan & Bradstreet several years earlier through business interaction I had while working at Leumi Check and prior to that as well.”

How did you locate the two companies where you wanted to get hired?
“Through Jobnet I sent targeted resumes to both companies. I also updated myself on the job openings. Regarding Dan & Bradstreet I knew in advance it was a veteran company with an international reputation, which pointed the way for the Israeli economy and touched on all sorts of markets.”

Why did you wind up choosing Dan & Bradstreet?
“For a month and a half I was in contact with Dan & Bradstreet and with another company in the field of shipping. At both companies I went through advanced screening processes and in the end, while I was still waiting for a reply from Dan & Bradstreet, I received an affirmative reply from the other company. I decided to turn them down and wait for Dan & Bradstreet. I was worth the wait since the job I was offered at the place I chose was broader and more in-depth.”

What did the recruitment process entail?
“I underwent a series of interviews and evaluations at the internal assessment center run by the company’s Human Resources Department. I was very impressed that the company didn’t hire the services of an external firm to screen candidates, but built an assessment center that would meet its needs. Also, during the recruitment process I noted that the first-rate personnel lineup fit the kind of job I was looking for – college-educated, stable, not too young and not too old and people seeking long-term employment.

What is the job of the customer portfolio manager?
My job entails selling BI packages to business clients. The BI packages include detailed information on over 400,000 companies and business in Israel and the ties among them, information for credit risk management and customer portfolio analysis, regular updates on changes taking place at companies and businesses, etc. I belong to the department of clients involved in printing, paper, cardboard and graphics production. After marketing the products I follow up on the client’s actions and interaction with the system.”

How does your job differ from your previous jobs?
“Working as a customer portfolio manager at Dan & Bradstreet is broader in scope than any other job I’ve held, and allows me to touch on every parameter of the Israeli economy. The work is fascinating and demands delving deep into the sales process. The process itself is longer, requires patience, training and negotiating with high-level executives at various companies. And on any given day when I open up the newspaper I can find quotes by Dan & Bradstreet economists. I know that we have a lot of influence on company rankings and the information we provide helps companies and businesses a lot.”

What do you think of your job and the company so far?
“I’m very happy to have come here. The job is unique in the Israeli economy. On advantage is the range of products, which allows me as a client manager to find the best products to fit the customer’s needs. Also the raw material – i.e. the business information – is a product that will always be needed in the market.”

Ariel Shunami’s success story
Upon completing his degree in biology Ariel Shunami, 37, joined the IDF as a major assigned to a managerial/command post. At his post Ariel was exposed to the computer field and decided to undergo retraining after developing an affinity for software testing. Dan & Bradstreet is the first job Ariel has worked at as a QA engineer.

What attracted you to the high-tech world?
“Toward the end of my commission I felt a need to change my career track by specializing in another field. After acquiring a lot of experience in computers, especially in information systems, I decided to expand my horizons by joining the high-tech world.
I spoke with friends about the field of software and eventually reached the conclusion that the type of work in QA and the broad, system-wide vision it requires best matched my abilities and needs. In my opinion software testing and quality assurance are the most important aspects in successful product development.”

Were you working while looking for a new job?
“Yes. After the army I got hired as a clerk at the Holon Municipality to maintain a regular income, since I was supporting a wife toward the end of her pregnancy and a little girl. At the same time I took a John Bryce course in software testing and quality assurance. The job-search process took about a year.”

That’s a relatively long time to look for work.
“Since I was working at the same time I allowed myself to be picky and didn’t compromise. After disseminating my resume widely I was contacted by many companies, but the offers were not to my liking. I was offered relatively low pay since I had no background in QA. Still, I would come in for interviews confident that I was a worthy candidate, both professionally and as an individual. My age and the respectable work experience I had acquired were important parameters that employers took into account.”

Which considerations guided you? What was important to you in a new workplace?
“I was looking for a place that would provide me a good learning opportunity – a multifaceted company involved in many different types of technology. I was trying to find a place that would allow me to advance, a place where I would have a future professionally. Also, the working environment was no less important to me. I wanted a place where I’d like coming in every morning, with high-caliber people who I’d enjoy being with.”

Where did you send your resume?
“Every day I’d send out numerous copies of my resume through several job-search sites, including Jobnet. Every week the site would e-mail me a list of positions based on fields I selected.”

Did you have uncertainties in choosing between Dan & Bradstreet or other companies?
“Around the time of the recruitment process for Dan & Bradstreet I was in advanced stages with two other companies. One of them was an outsourcing company that I decided to pass up because the idea of outsourcing didn’t appeal to me. As a QA tester without experience getting started at a new company, I felt it was important to get hired as a regular employee directly subordinate to the company.”

How did you conduct your search process?
“My first interview was with Adi Eitan, the recruitment coordinator, and Yizhar, the QA team leader. The conversation was very pleasant and I already got a good impression of the company based on the personnel department. Then I had a second interview wit the vice president of development. The interview was really fascinating and unique in that he deviated from all of the conventions of job interviews. The vice president touched on character issues and tried to see what makes me tick. Following my interview with him I realized that after a year of looking I’d found my next job.”

Today, eight months later, what kind of contribution are you making to the company?
“First of all I created a portal for the department that will streamline and improve our work. Second, since I arrived at the company with insights into quality assurance gleaned from the course, I decided to implement the methodology at work. Every day I also examine how to change and streamline the testing process and carry out improvements accordingly.”

Are you pleased with the way your were taken in at Dan & Bradstreet?
“Definitely. On one hand I’ve had an opportunity to work with a manager like Yizhar. Our working relationship is very productive since he encourages me to share my ideas and take the initiative. We work together as a team rather than as a manager and worker. On the other hand I can say that Dan & Bradstreet got a QA man with a whole lot of potential and motivation. So it turns out that all of us benefit. On the social level, the people who work with me are very professional, and they offer me encouragement, guidance and support.”

What advice can you offer jobseekers?
“The most important piece of advice I can offer is not to give up and to fire in every direction. Send out your resume any way possible, using any and all means. Also, in looking for work I recommend defining important parameters to focus on, such as professionalism, the job, the salary, etc.”