Twenty-one-year old Vikki Wolfson of Rechovot began working one month ago as a morning sales representative at the Jerusalem Post, a job she came to through the Jobnet site. After completing National Service, Vikki looked for a dynamic, challenging job involving marketing and sales. Her fondness for the field brought her to a job as a sales representative for various magazines, and after working there for two months she got an interview at the Jerusalem Post and decided to leave her previous job.

On the Jerusalem Post:
The Jerusalem Post is a Zionist, Jewish newspaper founded in 1932 during the pre-state period and since then the newspaper has undergone many changes. This year the leading English-language daily is celebrating 75 years of success and prosperity. In 2005 the newspaper was purchased by Eli Azur, one of the owners of the Charlton Group, FM 103 radio, the Mekoman chain of local weeklies and more. Today the newspaper is growing in Israel and abroad, and even entered a partnership recently with the Wall Street Journal, which is owned by Dow Jones & Company.

Vikki says she has always loved the field of sales. “I’m very communicative, love working with people and have good powers of persuasion, so my personality is highly suited to this profession. Before coming here I got a job in telemarketing at a media company.”

Why did you start looking for work after two months?
“As a telemarketing representative I was working part-time, just five hours a day in the morning. Since I had free time I decided to find a second job to go with telemarketing and instead I wound up finding a fulltime job. I was also looking for a place that would provide me long-term opportunities for advancement.” 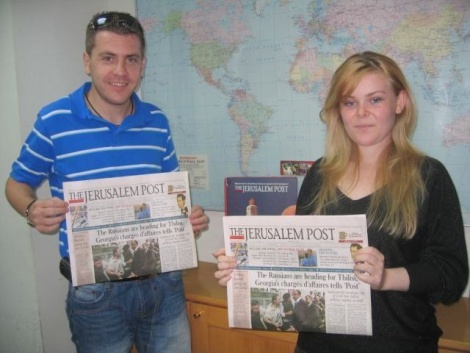 How did you come to the Jerusalem Post?
“I conducted a focused search on the Jobnet site for positions at media companies and newspapers, sending my resume out only for service and sales jobs. A short time later I got a call from Liron Koren, the human resources coordinator at the Jerusalem Post, who called me in for an interview. The idea that it was a newspaper I like and once subscribed to gave it a special appeal.”

Did other companies contact you?
“Since I focused my searches on the field of telemarketing I sent out few resumes, so I wasn’t flooded with job offers. Also, I wasn’t willing to compromise on my demands since I still had a job. Eventually, though the office was far from my home and it was fulltime work, I decided to go to an interview at the Jerusalem Post.”

What did the recruitment process include?
“I was interviewed by Tomer Margolius, the manager of human relations and training, for the job of sales representative on the morning shift. I told Tomer I wanted to keep working at my part-time job, but when he told me the company also sold magazines I realized combining the two would be impossible. We continued with the conversation, which then turned to more personal matters. Tomer described the newspaper and the challenging job to me in a persuasive and fascinating way.”

Why did you eventually choose to go with the Jerusalem Post?
“As I mentioned earlier I was already familiar with the newspaper before I came in for the interview, and I felt an affinity for its unique contents. And during the course of the interview with Tomer, who presented the added value of the position, I decided this was where I wanted to work and gain expertise in sales. It’s a place that develops its employees and will allow me to combine my studies in biochemistry with my job. Based on my friends’ advice and my own intuition, I decided to quit my job at the other company and even had to pay a fine [about NIS 1,000] for leaving.”

How did your first days at the company go?
“For the first five days I took a training course about the art of sales and about the Jerusalem Post, covering all of the sections. Tomer taught the course, which was quite fascinating, to a class of 20 representatives. We did various types of training on how to conduct conversations with customers, resistance scenarios, etc. At the end of the course we took an exam and eventually received an art of sales certificate. The five days went by very quickly – time flies when you’re having fun.
Afterwards, when I first arrived at the morning sales center in Tel Aviv, I was introduced to all of the representatives and managers and was given an orderly introduction to the job. Eventually I had all of the tools I needed to field a call and sell in a very service-oriented manner.”

What kind of company is the Jerusalem Post in terms of the atmosphere and the people?
“I’m on good terms with the other representatives who took the training course with me and they’re really great people. I also joined the morning sales team and we collaborate fully, gaining mutual benefit. We help one another in a non-competitive manner and work as a team, and when necessary we receive professional online support.”

Now that you’ve been working there for a month, are you happy with the job and with the company?
“Within my first two hours on the job I’d already closed my first sale and today I mentored a new representative, so I’ve adjusted to the job very quickly and I’m really enjoying it. This year I’m starting my degree studies and I’m glad I’ll be able to combine work with academic studies. I’m happy to come in to work and often I stay after hours based on feelings of commitment and belonging to the company. I get a lot of respect and that’s the main reason why I enjoy putting a lot of effort into my work.”

What advice can you offer other jobseekers?
“I warmly recommend looking for work via the Jobnet site. It’s divided into different fields in a convenient way and posts numerous jobs for both young people and older people. For me it was a great match.”

Tomer Margolius, manager of human resources and training, on collaborating with Jobnet:
“I’m very pleased with Jobnet and with the service we receive. What distinguishes Jobnet is the emphasis on quality resumes, not quantity. Through the site I’ve recruited committed, mature employees who pass the sales course and remain with us for a long period of time. Vikki is a sterling example of a sales representative we recruited through Jobnet a month ago, and she’s already showing good productivity.”