When 28-eight-year-old Ofer Taito of Be’er Sheva finished his bachelor’s degree in industrial engineering and management he had some decisions to make. Ofer was unable to find appealing employment opportunities, so he eventually decided to leave his hometown and focus his job search on the Central Region. Eventually Ofer found his current job as a BI developer at DataCube Ltd.,  through the Jobnet site.

On DataCube:
DataCube specializes in developing BI and data warehouse systems. The company designs, manages and directs projects for a variety of customers using all of the BI technologies recognized today in the Israeli market, e.g. ProClarity, Business Objects, Panorama etc. DataCube has 20 employees and is currently undergoing substantial expansion.

Why did you decide to focus on searching for work in the Central Region?
“In the South there are few opportunities for beginning engineers who want to get ahead and grow. There are a lot of companies at the Omar Industrial Park, but I think it’s hard to advance at them. For my first BI job I was looking for a place that would pave the way for my career, and I’m happy to say I found it at DataCube.” 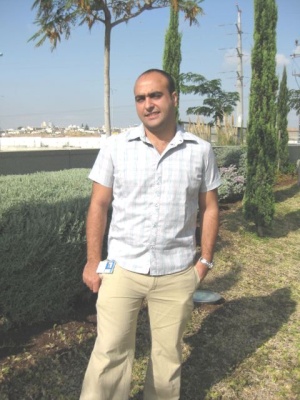 Ofer Taito, BI developer. “A small company with a lot of influence”

Why did you focus on business intelligence?
“I was first introduced to BI during my studies, in a course called ‘Data Warehousing.’ When I entered the ranks of jobseekers and started to look into the field of information systems and the offerings in the job market I found it was a growing field. The job descriptions I came across, which fit my abilities, were aimed at BI developers. I wanted to specialize in this field, which is considered complex, developed and in wide demand.”

Where did you send your resume out?
“I looked for work on several general websites and at personnel companies. Most of the websites referred me to jobs in the Central Region. I sent my resume primarily to high-tech companies and over the course of two months I traveled to interviews from the South to the Central Region. Since where I was going to be living remained uncertain at that point, I didn’t list an address on my resume. I recall that a Jobnet representative called to verify the information on my resume, and when I expressed an interest in moving to the Central Region she offered to submit my resume for a job as a BI developer at DataCube.”

As an inexperienced candidate, did you get a large response from the companies?
“A lot of companies got back to me, including both large and small companies from the high-tech sector. At three different organizations I got to advanced stages and eventually I chose DataCube.”

What made you decide to go with DataCube?
“I liked the fact it was a small, but influential company. I was also drawn by the area of enterprise, the distinguished customer pool and most of all the high caliber of the people I’d be working with. During my interview with the CEO, Reuven Tal, I could tell he was a cut above and had strong technological skills, and that I’d be able to learn a lot from him, making it an optimal opportunity to gain expertise.”

How did your integration at the company go?
“At first I went through a month of self-instruction with the help and guidance of the CEOs, Reuven Tal and Amir Waldman. Afterwards I was placed alongside veteran developers for several regular projects and one project of greater complexity, during which I acquired a lot of know-how. Right now I’ve been placed at a large insurance company as part of the project team.”

How is the work on the project carried out?
“We provide the customer comprehensive services including consultation, characterization, implementation, system support, guidance, assimilation and more. The job is partly outsourcing, so for most of the project’s duration I’m located at the client site. For the past five months I’ve been working on a project for an insurance company and every day I’m in contact with DataCube’s professional managers. Also, a project manager from the company is there with me and with the insurance company’s developer.”

What kind of a company is DataCube in terms of the atmosphere and the character of the company?
“The company, which is made up of 20 people working in full cooperation, has a warm, familial atmosphere. Ever since my first days at the company I received support and encouragement from the managers and developers, and I have personal ties with most of the employees. I’m very happy with the mix of workers, including professionals with a very strong character, and with the way the company is run. As proof of this, I’ve brought a good friend into the company.”

Dotan Ne’emani, vice president of marketing and sales at DataCube, talks about the company and its area of enterprise.
“DataCube was started in 2002 by Reuven Tal and Amir Waldman, who are experts in business intelligence solutions and data warehousing. Since its founding to the present the company has focused on BI and data warehousing, and serves a range of clients, such as the Health Ministry, other government ministries, Yashir Insurance, Office Depot, high-tech companies, etc.”

Why did you opt to hire a worker without any background or experience in BI?
“At DataCube there’s a tendency to recruit employers based on our general impression of their abilities and we take upon ourselves the task of training and guiding them. For instance, Ofer underwent a study track during which he received the tools needed to handle the job through various means within the organization, along with constant learning while working on the projects, to the point of managing a project independently. After several months, once the employee has acquired basic know-how, he undergoes formal training. Ofer, for instance, recently took a Design course and an SSIS course at John Bryce.”

How much does your collaboration with Jobnet contribute to your recruitment process?
“DataCube has longstanding cooperation with the Jobnet site, which we see as one of our most effective recruitment tools. We get superb service throughout the year, whether through advertising, regular interaction or efforts the site makes in addition to advertising, which provide us substantial added value as its clients. Looking toward the future we foresee many more years of fruitful cooperation.”

Ofer, after one year what’s your impression of the company?
“During the past year I’ve been pleasantly surprised by DataCube. I found out it’s a company that’s a center of technological information with a broad range of BI tools. The company has a lot of experience in the field and doesn’t scrimp on employee training in its efforts to develop us professionally. The company possesses a lot of know-how and implements a range of technologies, including databases and database interfaces, multidimensional databases, etc.”

Do you envision yourself developing at the company and advancing?
“I’m glad I’ve had the opportunity to join DataCube, which is one of the top assimilation companies in the country, and to start my career track here. I definitely have a professional future and lots of new things to learn on the job. The range of fields and content worlds here is very broad, which makes the work dynamic and captivating. Also, the field of BI is developing and upgrading itself all the time, so today there are many advanced versions.”

Do you have any advice for jobseekers?
“I recommend you remain consistent when looking for work, i.e. that you send out your resume all the time, not waiting for the phone to ring. Initiate meetings with appealing companies, submit your resume to them unsolicited, and always keep track of job openings. Job-hunting is a very dynamic field, so you should stay optimistic.”