Merav found her job as human resources manager at Shadow Computers through the Jobnet site.

“My previous job was as a placement advisor,” recounts Merav. “I felt I had exhausted the job, that I was capable of more and could advance. I had studied business administration with a focus on human resources, which is an area that has always interested me. I came to Shadow Computers with a foundation in this area. I knew how to hire employees and how to conduct interviews.”

Merav knew the time had come for her to look for a new job. “My friends had searched for work through Jobnet. They were the ones who referred me to the site. Once I had a chance to see for myself, I decided to send out my resume to all of the companies listed on Jobnet.
From experience I knew sometimes companies are looking for workers but for various reasons choose not to advertise, so I decided it was worth my while to take a chance.
I was called in for many interviews at various companies and because I knew exactly what I was looking for – in what area and what type of position – I was very focused and bided my time, waiting for my opportunity.

“The opportunity was not long in coming. After a month I got a call from Shadow Computers and got the kind of job I had been hoping for. I was very well received from the start and I told myself right away this was the place where I wanted to work. And I want every new worker to receive the same gracious reception I did when I came here.” 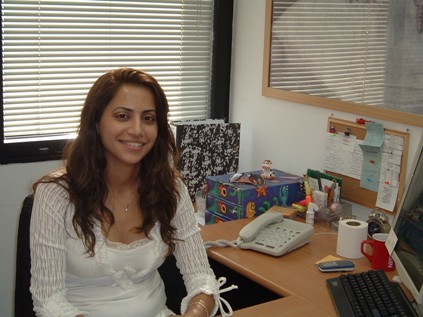 Merav Yehoshua in her office at Shadow Computers

In her work as human resources manager Merav is in charge of company recruitment. She places ads, screens resumes, conducts interviews, checks with references and carries out the hiring process.

“I’m constantly in contact with the employees. I make a point of listening to them to see how they’re doing. I believe that if the worker has a problem it’s best to solve it as quickly as possible. I ask every employee – both newcomers and company veterans – for feedback every three months.”

As human resources manager and the person in charge of recruiting new workers, Merav has some valuable advice for jobseekers. “I think job candidates who know exactly what they are looking for will succeed in getting what they want. People who come with fully formed ideas and a desire to prove themselves have an easier time getting hired.”

On job interviews: “It’s important to come to a job interview having done your homework. You have to know exactly what kind of place you have arrived at and the company’s area of enterprise. It makes a good impression on the interviewer when you display knowledge about the company. It’s important to arrive in a presentable manner, not slovenly or sweaty, not chewing gum and of course your cell phone should be turned off before the interview.”

Shadow Computers is a privately owned software house started 13 years ago. The company, which caters to insurance agencies and banks, is situated at the technological forefront, providing advanced software solutions through programs developed at the organization, and placing emphasis on professional service.

“It’s a warm company with good interaction among the workers,” says Merav. “People feel at ease here. The workers here are pleasant people who like to help and know how to share information. It’s a relaxed, pleasant environment without arguments or tensions.”

Shadow Computers is in the process of growing. The company currently employs 30 workers and hopes to double the size of the company in the coming six months.

“Since coming here I’ve already recruited nine new employees, including six through Jobnet. Jobnet is a site we trust explicitly and make use of extensively. Every worker hired has fit in nicely. I closely follow the hiring process and it’s very important to me to give every new recruit warm, personal attention.”