Nitzan, 31, is married and has two children:
“In 2002 I completed electrical engineering studies and started working as a planning engineer at the Electrical Corporation. I worked there for three years and then I decided to look for a new job.
“I felt like a little cog in a giant machine at the Electrical Corporation. I felt I was not getting anywhere and was not challenged enough. I was looking for a challenge, for responsibility. I wanted to take charge in my work and when I arrived at this realization I began looking for a new job.”

Eli, 30, recounts:
“My professional background is as a computer technician. Before I came to Intergraph I worked in the US for six months in the support department of a software company. It was certainly an experience, but not as amazing as I had expected. I decided I wanted to return to Israel and began looking for a job while still in the US.” 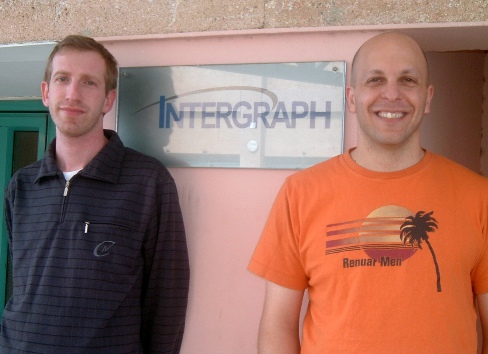 Eli and Nitzan at the Intergraph offices

On the job-search process:
Nitzan: “Two months after I began looking for work my luck took a turn for the better and I found a job at Intergraph. Actually my wife was the one who did most of the work of job-hunting. She was the one who sent my resume out and she was the one who did the searching on the Jobnet site. My wife loves the site and every time someone she knows is looking for work she helps out using Jobnet. It’s a very successful site that’s helped her find work for a lot of friends, and for me of course.”

Eli: ”I started sending my resume out while I was still in the US, but then I realized it was problematic since I couldn’t come in for interviews, so I had to stop my job-hunt. When I came back to Israel I renewed my search and naturally I turned to the Jobnet site. Jobnet has been on my favorites list for several years already. Every time I looked for work I turned to Jobnet. In my opinion it’s the leading site, both because of the range of positions and because it targets a really wide audience and provides a wide range of possibilities.”

On finding a job at Intergraph:
Nitzan: “About a week after I sent my resume to Intergraph I was called in for a series of interviews. Two weeks later I received a positive reply and the moment I finished breaking in my replacement at the Electrical Corporation I started working at Intergraph.”

Eli: “When I came back to Israel, while I was job-hunting I took a temporary job working on a project. When I got a call from Intergraph I was still involved in the project, so it took a month and a half from the time I was hired until I began the job.”

Intergraph is an American company involved in software development for the engineering market in the field of machinery and electricity. Intergraph Israel is a subsidiary of Intergraph worldwide. The company began in 1985 as a private firm under the name PID and in 1999 was purchased by Intergraph worldwide. Intergraph has branches and subsidiaries around the world. Located in Kiryat Motzkin, the Israeli office has 80 employees.

Nitzan and Eli both work in the company’s technical support department.

What they have to say on working at Intergraph:
Nitzan: "Intergraph is a young and dynamic company. The work here is interesting and challenging. It’s not routine and monotonous, but work that demands thought and creativity. I define Intergraph as a sane high-tech company. On one hand it offers the challenge you find at high-tech companies, but on the other hand the hours are normal and it’s possible to combine work and family life without either one being at the other’s expense.”

Eli: “The work environment here is young and the people here are very high-caliber, both on a personal level and an intellectual level. It’s very different from other places where I’ve worked. The people here are quite nice and eager to help. The work is very interesting. We look into things, think in creative ways and try to find solutions for a variety of needs.”

On the absorption process at Intergraph:
Nitzan: “I’ve found a warm home for myself here. It’s a small, intimate company with really great people. The atmosphere here is pleasant and the place is really great from a social standpoint. I’m very happy here and I see it as a tremendous improvement in my job conditions.”

Eli: “I’m really happy I came to Intergraph. I was very well received here. The atmosphere here is familial and pleasant. For me it’s like a home away from home.”

In conclusion Adi, director of recruiting, says:
“During the past ten months six of the workers we’ve hired came through the Jobnet site. They were hired for a variety of positions – support people, QA people and developers. Intergraph Israel is growing and we are about to launch a massive recruitment drive.”