Gil Gorfinkel, 27, found his job at Tefen through the Jobnet site.

Gil, who has a degree in industrial management and planning, began working for Tefen as a consultant ten months ago after working part-time for two years at Rafael as assistant finance manager.

Says Gil:
“The fulltime job I was offered at Rafael upon completion of my degree was a post outside of my field and of less interest to me from a professional standpoint. So I decided to look for work elsewhere. Another consideration was moving to the Central Region. I wanted to return to the area, so I wanted a job there.”

On the job-search process:
“I went about job-hunting on the Internet alone. There are many different paths in the area of industrial management and I checked into which path interested me most. I did my search on Jobnet according to profession and other factors, such as geographic area. I looked for work under the heading “Engineer” and I knew I wanted to join a company as a consultant. Sometime around March of last year I found a Tefen ad on Jobnet and sent my resume via the site.”

About two months went by from the moment Gil decided to look for work until he found his job at Tefen.

“A short time later I received a call from Tefen and within a few weeks I was called in for a series of interviews and a day of testing at the company offices. About a month later I started working.

“For the first two months I was going back and forth between Tefen in the Central Region and the Technion in Haifa. I was working part-time at Tefen based on a flexible schedule that allowed me to complete my degree properly and begin integrating into the company at the same time. When I finished my studies I moved to Tel Aviv and then started working at Tefen fulltime.” 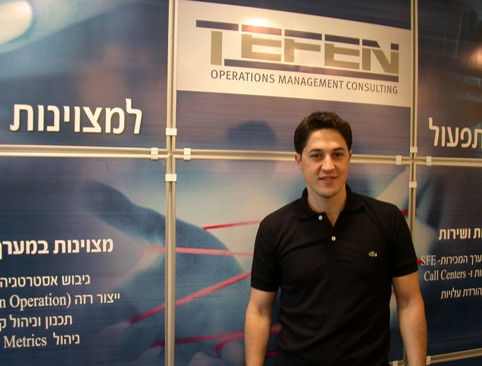 Tefen is an international consulting company for business excellence. Tefen assists high-level management teams at organizations in formulating and executing business strategies, while improving the organization’s performance and creating infrastructures for long-term business excellence. Tefen is an Israeli company traded on the stock market and has set up subsidiaries and acquired consulting companies in the US and Europe. One hundred and sixty workers are employed in Israel, including 110 professional consultants.

On work at Tefen:
“What we provide our customers is knowledge, which is Tefen’s primary strength. A specific team is built for every project, based on its needs. The average consultant works on three projects at a time. Some are long-term projects, while others have a clear end date.
I’m engaged in several projects that are challenging, interesting and foster personal development. I’m constantly learning about new fields. In fact I’m learning a whole lot here. Tefen has people with a lot of know-how and a lot of experience, so there are plenty of people to learn from. The work is really enjoyable because it combines learning with doing.”

On the hiring process at Tefen:
“The people at Tefen are really nice and warm and took me in very nicely. There’s a human resources staff that takes care of new employees in terms of training and integrating them. Every new employee is assigned an instructor who guides him during the initial months. The instructor explains to the new worker how things run at the company and serves as a sort of first friend at work. Within a short period of time the new consultant starts settling into the job. At first he’s given simple tasks and later advances. Tefen has a broad range of customers in all sectors – financial institutions, government ministries, high-tech companies, insurance, industry, commerce and services – making the range of projects very broad.”

In summary:
“I’m very happy here. The job is varied, dynamic, interesting and instructive. The work environment is very homey and pleasant, and many of the employees are young like me, so it’s fun from a social standpoint, too. I travel all around the country, visiting various customers. It’s nice to experience new environments and see new things.”

Yifat Iluz, human resources coordinator at the company, who also came to Tefen via Jobnet, adds:
“Jobnet is an important recruitment channel for us. Many candidates arrive via the site and over the past year 11 new employees have come through Jobnet.”