Grisha Weinstein found his job at Tower Semiconductor via the Jobnet site.

Grisha Weinstein, 27, was born in Uzbekistan and moved to Israel with his family in 1990. He spent his childhood living in Beit She'an. Grisha has a bachelor's degree in chemical engineering from the Technion. During the course of his degree studies he worked at Teva Pharmaceutical Industries and today he works as a process engineer at Tower Semiconductor and is on the research and development staff in the field of photolithography.

On the job-search and hiring process:
"I looked for work on the Internet, primarily through Jobnet, and also through the student association and in newspapers. After sending my resume in via Jobnet I got a call from Tower asking me to come to the next company recruitment drive. I went through several stages in the hiring process: group dynamics and testing such as intelligence tests, personality tests, technical and cognitive ability analysis, etc. A few days later they notified me I had passed the initial stages and I was invited to come to professional interviews." 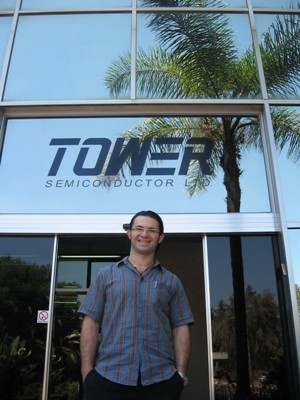 Grisha Weinstein at the entrance to the Tower Semiconductor building

On the breaking-in process:
"During my first days on the job I was taught the rules of the game: where I was, everyone's names and where everyone stood. From a social standpoint I think I came to the best staff I could join. Everyone on the staff is young, has a good head and is laid back. It feels good being a part of the staff and I feel comfortable asking questions when I don't understand something. There's a lot of support. The work is high-paced and sometimes the output demand pushes the limits of our ability."

On the position:
"I've been working for the past nine months as a process engineer on a team of eight engineers in the R&D department. The staff I belong to works on photolithography, which is a field in optical printing. We work with laser-sensitive chemical substances and put them through chemical and physical processes. Our final product is chips used in digital cameras and other electronic devices. We're in charge of bringing new technologies to the level of continuous production and when the technology is ready and stable we pass it on to the Fab 2 department.

On the atmosphere at Tower:
Grisha says Tower is a very dynamic company. Most of the employees are young and motivation is very high. Due to the intensive dynamics there are a lot of shifts and various opportunities open up, such as opportunities to move from one department to another. Tower fosters and encourages its workers to continue developing and learning, and even opened a new program called "Tower University," which provides employees professional courses at a high academic level within the company.

Recommendations:
Grisha tells other job-hunters: "At first I sent out a lot of resumes to all the companies thinking they'd get back to me within two weeks and I would be the one who has to screen them. I discovered it doesn't work that way. The responses take a long time to arrive, but you can't give up. Good opportunities do come up. You have to wait a few months and think positive. It takes a long time before the wheels start rolling, but eventually the time comes.

Nitzan Ganz, head of recruitment at Tower Semiconductor:
"Grisha really is a success story. Grisha skipped a stage. Generally process engineers arrive at the R&D department with a master's degree or they are engineers who have spent time in another department at the company. Grisha passed professional interviews in two departments and both of them really wanted him and fought over him, and R&D was the winner!"

Nitzan also describes the atmosphere at the company: "Tower is an Israeli company, a fact that influences the mentality and the spirit at the company. Communication is free and open. The company is ego-free. It's not stilted or formal and is very flexible. There are no positions at the level of mere cogs in the machine. The employees have a lot of independence, responsibility and initiative. Tower is a manufacturing company that works all year, seven days a week, 24 hours a day, which has a lot of significance in terms of job commitment. There's a lot of action, excitement and motion, but the work is not right for everyone due to the demands involved in making oneself available to the job and the site. Personality is critical to success at the company. The character and style of the people who get hired here is what preserves the company's youthfulness and vigor."


Looking for work? Go to Search

Be a part of the success at Jobnet!