Limor Yarkoni found her job at Oracle – via the Jobnet site.

Limor, an economist with a bachelor's degree in economics and a master's degree in business administration, worked as an economist for several years at a large food chain and then held a job at a high-tech company for eight years.

Limor recalls:
"I had no intentions of working in the high-tech world. I wound up there based on a desire to expand my knowledge and thought it would be temporary, but I saw that it was a good thing and decided this was the area I wanted to continue in. I arrived at Oracle from a company where I worked for many years in other CRM products and I acquired a whole lot of experience in other CRM systems."

Limor: "After eight years at the same company I was feeling I had exhausted all the opportunities it had to offer. I had reached the job that most interested me at the company and I realized if I wanted to continue advancing the next logical step after eight years would be to assess what's available elsewhere. Oracle was the only company I considered relevant even before I started assessing outside options, because for me it was very natural to want to work with the world's best-selling product, which a leading company the size of Oracle had purchased." 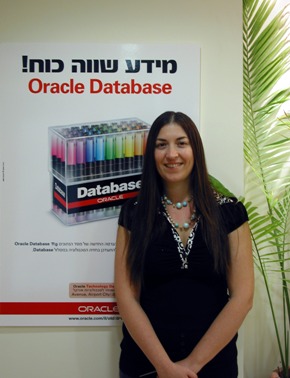 On the company:
With operations in over 145 countries, Oracle is the world's largest supplier of organizational information management programs. Oracle Israel was founded in 1996 and is involved in marketing, sales, support, implementation, systems training, databases, etc.
During its years of operations in Israel Oracle has expanded its customer base to over 2,000 companies.

On the job-search process:
"I sent my resume to a lot of companies, including Oracle. I used three websites during my search. Jobnet was the primary one among them and through it I got a lot of job interviews, and it was also the one that eventually brought me to my job here. It was very convenient for me to look on Jobnet because of the good screening system it has. On one hand I gleaned the jobs I wanted, and on the other hand, through the site I learned about other companies I hadn't been exposed to beforehand."

On the job-hunting period:
"Very quickly I came to the conclusion that I didn't want to start working right away. I had 13 years of nonstop work behind me and I decided I wanted to take six months off.
"Before I went on my break I contacted Oracle through Jobnet. During my vacation they got back to me. During this period I looked for jobs, primarily to see what the market had to offer. Meanwhile the hiring process with Oracle began."

How was the process with Oracle conducted?
"As part of the process I was interviewed by three or four people at the company and customers and the longer the process went on the more I grew certain I had made the right choice. All of the people I met at Oracle were wonderful, and what I really liked was that as part of the process they offered me a variety of positions. I decided on a certain position and they thought it through. They evaluated, together with me, what was really best for me. It was great because they also offered me things I hadn't thought about that can be an option for me in the future. I didn't encounter this at any other company. This process gives you the feeling that when you start the job you're very sure of what you're doing. I had already seen everything, been exposed to everything. They're sure and you're sure."

How did you get hired at Oracle in the end?
"It was a relatively slow and prolonged process of meetings once a month. Three days after my vacation came to an end we signed a contract and I began to work immediately. The timing was perfect for everyone."

How was you're breaking-in period at the company?
"My entry into the company went very smoothly. I was taken in very nicely and efficiently. The people were really nice. On one hand I was taken in at a gigantic, leading, international company, and on the other hand I was given very personal, homey and caring attention that was just amazing. I cannot point to anything here that later proved to be just for show. Everything here is genuine. Since my arrival I've taken part in a whole lot of courses and events sponsored by the company. I spent two weeks in the US and took a general enrichment course given to all employees. I took part in trans-organizational activities and a lot of company conferences. There's a whole lot of support here, with exposure to information, a lot of online courses, written material and more."

Are you pleased?
"I feel that my intuition regarding Oracle was right on. This is a place that manages to combine quality with a human touch, and it's genuine. There are places that do this just so the employee doesn't leave, but here it's real. You really do feel that it comes from a desire to give the worker a good feeling, a feeling that he's enjoying himself and things are right and he can develop."

Do you have any pieces of advice for jobseekers?
"I warmly recommend using sites like Jobnet. For me it was very helpful. It exposed me to companies and ways of searching. There are systems that do the work for you at these sites and that's very helpful. I also advise manually looking for other companies and types of positions you weren't exposed to previously. Jobnet has a whole lot of information on the companies themselves. For me it was very important information. I'm sure I couldn't have gotten to so many companies and interviews without using sites like Jobnet."

Be a part of the success at Jobnet!