Everybody, by nature, aspires to succeed in life, particularly in one's professional life. The basic goal is to find interesting work suited to one's talents, advance at one's job and contribute to society. More and more people are discovering that through faith in their own ability and a bit of daring they can achieve this success.

Jacky Zacharia-Pittelson, 31, of Ohr Yehuda can attest, based on personal experience, that there's truth to this principal. "I believe a person who is confident in his abilities can succeed at any job anywhere," he told Jobnet. "I paved my own professional path until
I made it to my current job at Bezeq International. I'm now serving in a high-level post as manager of the Retention Center in the company's Sales Division. I feel this is the place to realize my ambitions and of course to advance further in the future."

In the following article Jacky tells Jobnet about stages of advancement in his career over the years, from a representative at a technical service center at a large communications company to a call center manager at Bezeq International, and explains what led him to change directions after many years, thereby arriving at his current job.

As a dynamic person highly motivated to have an impact and after six and a half years at a communications company, Jacky decided to look for a new job that would allow him to develop. After less than a month Jacky found his job at Bezeq International through the Jobnet site. Today, one year later, he orchestrates a call center numbering 40 workers. 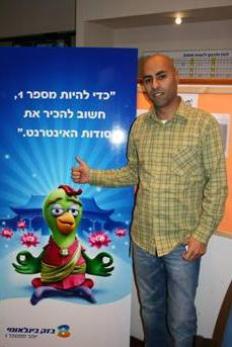 Bezeq International was founded in 1996 by Bezeq, Israel's largest communications corporation, in order to manage the international calling network. In 1999 the company underwent a major transformation when it penetrated the Internet market as well, which was just getting started in Israel at the time, and set a goal of leading it. Today Bezeq International is considered the leading company in its field, providing comprehensive communications solutions for customers based on the most up-to-date technological innovations in Israel and abroad.

At the age of 23, when he was just getting started in his career, Jacky set out looking for a job that combined customer service with a dynamic environment. "I got hired at a communications company one month before it went on the air, as a technical support representative at the service center. The company was getting started and I was really one of the builders of the infrastructures for the technical call center. Over the years I got promoted to the job of manager of the senior representatives. At a certain stage I felt a need to change jobs."

Why did you decide to leave a company where you had seniority and experience and where you could have continued to advance?
"I had reached my peak the job. I was offered other management jobs, but they didn't meet my expectations, so I looked in another direction. Also, I wanted to switch to a different set of contents. I knew the communications company inside and out, and
I hoped to find a new sphere that would interest and excite me."

You weren't worried about quitting?
"Over the years I had gained managerial experience at various levels, matured greatly and specialized in the field of service, so I had a lot to offer. I'm a person who believes in myself and my abilities and I'm aware that I have the tools to be a good high-level manager. I didn't have a financial commitment, like a mortgage or children, so I had the privilege of being able to leave the company unworried and build myself somewhere else."

How did you go about the job search process? Did you tell your managers you intended to quit?
"I had open, constructive communication with my former employer, so as soon as I made my decision I notified them of my intentions to leave. My wife Yifat conducted the search process for me since she was looking for a job for herself, too. At the time she was finishing an internship as a beginning lawyer, so she had free time she could devote to looking for work for both of us. She focused on the Jobnet site, sending resumes based on our respective areas of expertise. I told her to send out my resume primarily for managerial positions at call centers."

How did you eventually arrive at the decision to start working at Bezeq International?
"I received responses from a lot of companies, but Bezeq International was particularly attractive to me. A serious consideration was the nature of the job, which from a professional standpoint was much to my liking. The fact that Bezeq International is a part of the same group of companies as the company I worked at previously, which is owned by Chaim Saban, influenced my decision. I felt I was remaining loyal to the same place."

Tell us about the recruitment process you underwent as a prospective manager of the Retention Center.
"The process was very short, lasting just a few hours. On the first day I was asked to observe the call center for an hour to an hour and a half, form an impression of it, listen to calls, assess the dynamics and formulate a work plan. During the presentation I made to the manager of the Retention Department, Tomar Dana, and the head of recruitment, Shiri Friedman, I proposed various ideas regarding the way the call center operates and suggested solutions based on my prior experience. The next day I received a positive reply."

This is a very important job at the organization. Did you undergo training or intensive mentoring when you started working at the company?
"First of all I was received with open arms and I got a lot of encouragement from all of the managers and employees. I was broken in on the job, both independently by observing the representatives and shift leaders, and through the department manager and the managers of other phone centers who are familiar with the work processes here and live and breathe Bezeq International. I assessed the situation and looked into how it could be made more efficient and the service improved."

The Retention Center expanded considerably during the past year. Why was that?
"Today many companies are devoting most of their attention to retaining and maintaining the loyalty of existing customers. This investment has been proven to be effective and cheaper to the organization, and provides it a cushion for future business deals. Therefore we've substantially increased the center and we'll continue to expand it during the coming year."

In your opinion, what is the main different between your current job and your previous one?
"I came from a world of service and the world of customer retention has a sales orientation, so the approach to management is fundamentally different. There's a parallel between the two fields - the service approach is rooted in both of them, but the nature of the work in the sales world is more dynamic and competitive, with a lot of adrenaline. There's never a dull moment here. I see this as an attribute and it makes me get up in the morning with a smile on my face and keeps me going. In my current post there's a lot of responsibility resting on my shoulders. In the long run every manager is gauged by the number of customers he handles, and I can say that today the number of customers being handled by the call center is significantly larger than at my previous job."

How would you define the company in terms of the atmosphere and the people?
"Bezeq International is a company that stresses the fine details and thereby, in my opinion, wins its workers' favor. One of the things that most moved me was that after
I signed the contract, when I got home there was a bouquet of flowers waiting for me. Also, our call center is very intimate and it's a lot of fun to come in to work there. As call center manager I sit in an open space with the rest of the representatives, at eye level, and enjoy the special atmosphere."

Would you say the move to Bezeq International was successful for you?
"Definitely. I feel I've found my place and am looking forward to developing here. The transition contributed to me more than I expected. I was aware that the task of running the call center required a high level of professionalism and management ability, but
I didn't imagine I'd be in a position to have such a significant impact on the processes. Bezeq International allows every employee to rise up and effect change, from the
entry-level representative to the top manager. In the framework of my job, my ideas are listened to and carried out. I'm able to create changes and really have an impact."

Avi Romano, manager of the CV Center, which is in charge of recruiting representatives to the organization, what does your cooperate with Jobnet consist of?
"The Jobnet site is one of our main recruitment channels, serving us by advertising a broad range of positions in different areas of technology, marketing, sales, service, finance, administration, etc. As a large organization with 2,500 employees, the site often provides us many quality candidates in a focused manner. We also encourage promoting representatives from the various call centers at the organization to ranking positions. Eight out of every ten positions are filled by employees from within company ranks."

For the Hebrew Article