The following article tells the story of Reuven Chefer, 41, who has been serving as manager of the sales department at Getter Tech for the past eight months. Reuven came to the company with 20 years' experience in the field of office automation, during which he worked at some of Israel's leading printer companies. "I started out my career as a salesman in 1992 at a company that was developing a range of printing solutions for home and office use. I soon fell in love with the profession of sales, specializing in importing, marketing and servicing printers, copy machines, faxes, etc. Little by little
I advanced to the post of manager of the business sales team."

After 13 years as a sales team manager, the board of the company he was working for made an executive decision to change ownership. As a result, the department Reuven managed was slated to shut down. "I suddenly found myself without work and Passover was coming up." Eventually Reuven found his job after two months as manager of the sales department at Getter Tech via the Jobnet site.

Getter Tech, a part of the Getter Group, was founded in 1982 and is one of Israel's leading companies in the marketing and dissemination of electronic consumer products for home and office. The company specializes in printers, copy machines, LCD displays, projectors, software, computers, telephony, etc.

Getter Tech is the exclusive representative of a long list of top international companies, such as Konica-Minolta, BenQ, Lexmark and Riso. Today Getter Tech has over 400 employees. 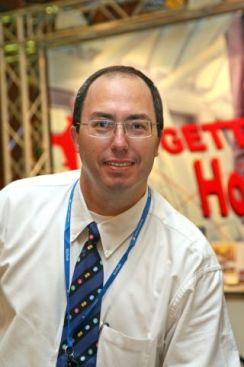 Was it hard for you at first to leave your job after such a long time and look for a new position?
"As a result of the managerial changes I did find myself without work, but I'm an optimist who sees the positive in every situation. I left when Passover was rolling around, so I took advantage of the time off to spend time with my kids and look for a new position.
I was also given an option to stay at the company in a different managerial position, but
I made up my mind to quit, based on a feeling of total confidence that I was doing the right thing. I'm still in contact with the CEO of my former company and even with his replacement, so I ended the job in a very dignified manner."

Your job search took two months, which is a considerable amount of time for a family man to go without work.
"I decided to leave my job in order to advance to a higher, more challenging post than my previous job, so I allowed myself to be picky and conducted a search in a calm, contemplative way. Furthermore, as a very knowledgeable, experienced sales manager
I was contacted by many companies, both from the office automation industry as well as other industries, so at least three times a week I spent my time 'enjoying myself' at interviews and evaluation centers."

Which criteria were important to you in the new job you were looking for?
"I searched for a fascinating position at a company that offered a selection of solutions or a broad enough range of products for my sales department. When it comes down to it, as salespeople we're gauged by the number of sales we execute. Sales management is a very broad field made up of many factors, such as recruitment, integration, training and the conduct of the salespeople, but most important of all is that there is a range of products and services to offer to customers."

Where did you look for work?
"My job changes have always come from acquaintances, so I've never been in a situation of really looking for work. I had at my disposal two search channels. The first was the
old-fashioned weekend newspaper. The second was the electronic media, which for me was a new search engine I had never used before, since 20 years ago it wasn't widespread."

What piqued your interest at Getter Tech?
"Getter Tech interested me most of all because it specialized in office automation, which is where I hail from. After visiting the company website I started keeping track of its business activities, turnover figures, etc., in order to update myself on its level of financial strength and other stats. I realized it was a stable company where I'd be able to develop and grow. Also, the range of products and the size of the company as a group made up of five subsidiaries made a strong impression on me."

Yours is a key position at the company. Did you face competition against other candidates trying to get hired?
"As far as I know they spent a long time looking for a candidate who was right for the job. Also, the recruitment process was quite involved: two months packed with interviews and professional tests. As part of the process I underwent an initial interview at a candidate screening and evaluation center, following by a one-on-one interview, a day of assessment testing, a conversation with a psychologist and finally, a talk with the CEO and owner of the company. You could say there was never a dull moment during those two months."

What's the advantage of your present job compared to your previous managerial post?
"My department at Getter is a lot bigger and the selection of production we offer is broad. I'm currently manager of a department numbering ten salespeople and two product managers. The future is wide open because we're set to do further recruiting for the department. We compete as a big league company in the office automation industry. Our main competitor is Xerox."

Describe your integration process as sales manager at Getter.
"I was given an existing sales department made up primarily of veteran salespeople who had been working at the company for about 17 years. I took up the post with the goal of continuing to provide good yields and even streamline work processes in the department.
The integration process was mostly self-help and on the job. I was given a decent breaking in, thanks to the fact the previous sales manager, David Rosen, was still at the company, but in a different position. I also sat down with the CEO, Shai Tanna, who explained to me about the company's operations, structure and the interfaces I'd be working with."

How did it feel to step in as a new manager of an existing department?
"I see the job as a real challenge. On one hand I entered a living, breathing system that's charging forward and I have to deal with a group of people that includes some who know the system better than I do. On the other hand, I'm trying to prove to myself and the executive board that every new worker has the potential to bring a new spirit into the organization. I came into Getter Tech with a lot of experience. I've learned a lot over the years and I try as I go to achieve goals and improve the way the work is conducted."

What kind of place is Getter Tech in terms of the atmosphere and people?
"The atmosphere is very relaxed here and I welcome the change. Though there's always pressure to meet goals, I see this a kind of personal challenge that drives me every day. In terms of the people, the CEO and the former department manager are always ready to lend me a hand because this is a very comprehensive management job. Also, my counterparts in other departments encourage me and help me when I need it. It's fun working at a company where everybody - from the clerks and receptionists to the last of the managers - help those who are new at their jobs. I haven't felt insecure for a moment. My assimilation at the company was smooth and natural."

Are you happy with your new job and with Getter Tech?
"I feel glad waking up in the morning for work. I have a lot of plans for the future and
I have a vision of continuing to build the department. My job offers a lot of room for creativity and I see getting hired at Getter as another step forward along my professional path. It's a solid, serious company, so I see myself staying for many years to come."

Do you have any suggestions for job-hunters?
"I recommend all Internet users make use of the Web, which I think serves as the leading channel among the various job-search options. To prove my point, most of the resumes
I sent through websites drew responses. The Internet is considered a convenient search tool highly suited to the reality we're living in and by simply hitting "Enter," allows you to directly access many companies."