Many people suddenly choose to make a mid-life career change. Instead of being locked into their current profession, they bravely decide to make a transition. Amit A., 37, is one of them. After years of working as an attorney she decided to develop a new career in computers.

"As a lawyer I went through studies that weren't easy, an internship and exhausting bar exams. I worked at a law firm for a year and as a lawyer at a bank for another two years. Then I decided to follow my heart and leave the profession."

Amit found her job as an automated testing expert at Traiana seven months ago through the Jobnet site.

What made you switch to a totally different field?
"Practicing law is a special type of profession. A lawyer is constantly in a confrontation and waging a battle for the client, and the job requires defeating people and sometimes being manipulative and cunning. The nature of the work doesn't suit me. I don't like working that way. I had a gut feeling that I should change directions and felt I wasn't fulfilling my potential."

Even so, you continued working in the profession for a number of years.
"I tried to give the profession a chance since I had gone through a long process of degree studies and an internship before receiving my license. Also, during those years I got married and my first daughter was born, so working at a bank with regular hours and good terms was convenient." 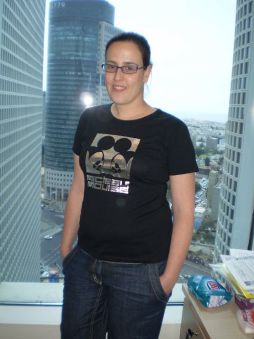 Amit at the Traiana offices

When did you reach a decision to change directions?
"After nearly two years at the bank I decided to look into the field of computers and programming. I took an introductory course in algorithms that provided me basic concepts in computer science. Through the course I was exposed to a fascinating field and afterwards I decided to leave the bank and take a retraining course in programming at John Bryce. My daughter was already a year old by then and I got full support from my family."

Without a degree and without experience, did you encounter difficulties looking for work as a programmer?
"Yes. I had a hard time getting hired as an inexperienced programmer and during the same period [the year 2000] there was a general feeling the 'bubble' was about to burst. I got hired to work as a manual tester and after a year and a half I got transferred to the company's lab team, which conducted automated testing. Layoffs also put me back in the ranks of jobseekers."

How did Traiana enter your life?
"At the last company I worked at substantial changes were made and the company's future looked uncertain, so I decided to look for a new place to work."

How did you conduct your job search?
"During my maternity leave I updated my resume and visited job-search websites, focusing on Jobnet. I also contacted personnel companies via the Internet. It was a fulltime job. Every day I got several phone calls and went to interviews. I was very surprised when I found a job at Traiana just one month after I'd started looking."

What considerations did you take into account in searching for a new position?
"I had already spent several years working in the field of testing so I had set criteria.
I was looking in the field of automated testing for a medium-sized company, so I didn't send my resume to large corporations or startups. It was also important to me to get hired at a company that invests in its employees professionally and in terms of opportunities for promotion. I wanted to get hired at a stable place where I'd be able to grow, work for an extended period and settle down. After a month of searching I had four job offers in hand, one of which was from Traiana."

What made you choose Traiana?
"In the end the decision was based on a gut sense. The interviewers were nice and professional and I liked the employees I met. The recruitment process wasn't particularly exhausting; it included a professional interview with a team leader, an in-depth personal interview with Michal Hirshstein, the human resources manager, and another interview with the manager of the testing group. Also, the automated testing staff at Traiana is very professional and uses numerous tools, which provides an opportunity for me to gain familiarity with technologies I hadn't been familiar with previously, such as the UNIX operating system."

How did your integration at the company go?
"I was hired to work on a relatively small staff as the third tester on the staff. An orderly training program was prepared for me, during which I was sent to the various departments at the company to get thorough exposure to the company's products and technologies. After two months I started testing independently."

Why did you continue working as a tester rather than looking for a position as a programmer?
"I fell in love with the field of testing at the first company I worked at. As a programmer your view of the scene is very focused, while the tester has a more in-depth view that extends to all phases of the product development process from every angle – from the viewpoint of the user's experience, development, etc. It's a job that combines both the advantages of testing and programming."

What do you think are the advantages of QA?
"While I was looking for a job I noticed there was a lot of demand for automated testing. Testers' value has risen and every high-tech company needs a QA staff, so the field is developing and companies are investing in these employees."

Human Resources Manager Michal Hirshstein describes the company:
"Traiana, which was founded in 2000, develops and markets technological solutions for the financial market. Our main clients are among the world's largest banking and financial institutions. We have 120 employees located at a number of sites: the headquarter offices are in Manhattan, the development center is in Tel Aviv and the sales office is in London. We were recently sold to British corporation ICAP, making it their first acquisition in Israel."

How does cooperating with Jobnet contribute to your company?
"Jobnet is the main website we work with. Through the site we receive focused, quality resumes. The proof is that we filled seven positions through Jobnet, including a job for a configurations manager, which is a very hard position to recruit for."

Amit, do you feel you've come to the right place?
"I feel I'm learning all the time. My staff, which provides very valuable services to the development department, is very professional and plays an important role at the company. The opportunities for automated testing here are open professionally and you can develop a lot of tools and develop yourself.
In addition, Traiana is made up of a wonderful set of people and has great atmosphere. I'm very pleased from every standpoint and during the seven years I've been here I've brought in two friends of mine through employee referrals."

What recommendations do you have for jobseekers?
"It's important to define what your looking for as clearly as possible in order not to get lost in the chase, and to build criteria based on the type of company, its location, etc. Also, based on my experience, I can attest that it's important not to get locked in to anything. Everything is possible and sometimes change is a good thing."