Success Story – Eiron Shabtai, began as a Project Manager and was promoted to deputy director of Choshen Synergy / Hadas Shimoni

Eiron Shabtai, who plays base guitar for the band Synergy, is an industrial engineer and has a master's degree in business administration. He was just completing his term in the Personnel Division of the IDF when he started looking for work. "After finishing my degree at the Technion under the Academic Reserves Program, I started serving in the IDF at the age of 22, occupying several challenging posts in the area of personnel and organization and methodology, and got promoted up to the rank of colonel." After seven and a half years he decided to enter the civilian workforce and develop a career in the business world.

Eiron found his job at Hoshen Synergy  through the Jobnet site. After two years as a project manager Eiron was appointed deputy directory of the company, making him responsible for managing projects and a partner in the company's business development, management of recruitment processes and employee retention, guidance and training.

Why did you decide to leave your high-ranking army post?
"I must admit an army job does has a lot of advantages. My army service was a bit irregular. My job involved a lot of responsibility and impact on the decisions made at the organization. At the same time I decided when my period of service ended I would focus on the business world. I wanted exposure to the civilian market, which has a wide range of different styles of work, and that's how I found my job at Hoshen Synergy." 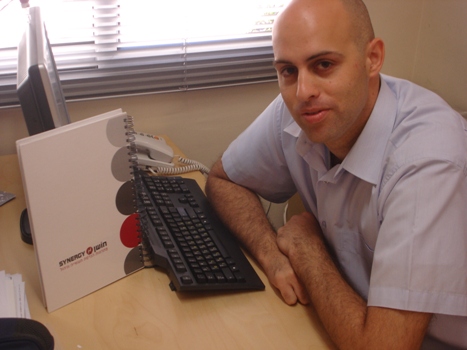 How did you come across the Jobnet site?
"I looked for work through two channels – via the printed media and via the Internet – and quickly focused my efforts on the Jobnet site. My wife, who was also looking for work at the time, recommended Jobnet to me, saying it was a convenient and efficient way to search. Several companies got back to me and I even went to a number of job interviews."

What kinds of jobs were you looking for?
"I was looking for management jobs in the world of industrial management and business administration. I caught sight of a position for a project manager in the field of organization and methodology, and felt drawn to it. The job description matched my hopes of stepping into a new sphere – the business world."

Why did you eventually settle on Hoshen?
"Shortly after sending in my resume for the position of project manager at Hoshen Synergy, I was called in for an interview with the CEO, who is also the owner. The screening process was quite quick and focused, and since they made me a concrete, attractive and challenging offer I took it, rather than continuing the recruitment process I had started at another company.
The company's area of enterprise, the level of responsibility the position had, the opportunity for professional development, the range of activities the job entailed and the way I was treated by the CEO throughout the screening process were all to my liking.
I also found out the company emphasizes an sound balance between work and private life, which later proved right for me since it allowed me to develop not just at work, but also in the world of music."

After several interviews with the CEO you were hired. What did the recruitment process consist of?
"The first interview was very comprehensive and included both professional and personal questions. Afterwards we held several meetings over the course of a few weeks, while I was still working at my previous job shortly before my discharge. During these meetings I got to know the company and my direct supervisor [the CEO], and we drew up an employment agreement. Since at the time the company was working on a project related to the field I specialized in – personnel planning and management – the job called out to me even more."

On Hoshen Synergy:
Founded six years ago, Hoshen Synergy is an engineering and industrial management company specializing in organization and methodology in the financial sector. The company provides industrial engineering and management solutions in the fields of planning, computing, organization and operations at financial organizations, and is fully involved in their implementation. The company currently employs some 30 industrial management engineers with vast experience in the field of improving and streamlining Israel's leading financial bodies. The company's products are marked by uncompromising quality, meeting the client's needs and a high level of applicability.

How did your first days at the company go?
"At first I worked together with the CEO on a large project that at its foundation we defined as an angle on personnel management at a large, respected bank. Over time I was placed in charge of additional projects of considerable importance and more employees were added to my staff."

Was your first project a success?
"A big success. The management stance we formulated was approved by the bank three months later and to this day we're taking part in its implementation. The project was very significant and had a sweeping impact on the entire organization, like a large portion of our projects whose results can be seen out in the field a short time later."

You were promoted to deputy director after a relatively short time at the company.
"The company has been in the process of growth and development for the past three months. Expanding the number of workers and the extent of projects forced us to delineate an upper level of ranking managers who would be involved in business development while tackling challenges stemming from this development, including the challenge of recruiting and retaining personnel. Toward this end the CEO decided to appoint three deputy directors – myself and two other outstanding project managers who worked at the company shortly after its founding. We work in synergy and divvy up every area of responsibility."

What makes Hoshen Synergy special as a small company?
"As a small company each and every worker has a real impact, affects the quality of the products and comes in contact with high-level figures from the client company. And unlike other consulting companies, we focus on a single sector, the financial sector, including banks, investment houses, credit-card companies and insurance companies, so we've gathered vast professional experience in the field. Over the years we've been involved in projects in almost every unit there is, and we've been exposed to most of the work processes in the financial sector. At the same time we've built a stable core of employees who've acquired experience, know-how and the capabilities to cope with almost any project. Furthermore, the CEO and the deputy directors are involved in all of the projects and contribute their experience to the rest of the workers."

What kind of company is Hoshen Synergy in terms of the atmosphere and the staff?
"It's a company where interaction is informal and even close-knit, where emphasis is placed on a sound balance between work and home life. The open communication among the employees and the sense that everybody is strongly committed to the company's success make the employees come in to work with motivation and a smile.
To achieve this we've set up routines, such as a cake and coffee meeting every Thursday to sum up the week's work. At these meetings we provide a survey of the week's events with a special atmosphere. Also, every quarter we hold a conference for all of the employees in order to sum up the quarter, and we update them on the company's performances and goals, introduce new employees, etc. Periodically we arrange a big conference for employees. Last year it was held in Turkey.
Furthermore, every employee has the ability to develop professionally at the company through the range of projects and through professional workshops at the company's expense."

As deputy director do you see yourself continuing to play an influential role and develop at the company for years to come?
"Hoshen Synergy is a company in the process of constant growth in terms of the number of employees and customers. Although I hold a high-level post I feel I have room to grow since the company itself is constantly moving forward. In my job the responsibility, the challenge of business development and the management and professional challenge are on the rise due to the massive intake of employees and the many projects coming into the company.
I see this as a success story in that I went from a high place to a higher place from every standpoint."

On cooperation with Jobnet:
"We recruited a considerable portion of Hoshen workers through the Jobnet site. It can definitely be said of our company's employees that they belong to the upper crust of industrial engineering and management. As a customer the site allows me to track how many users view the positions posted through the management interface. This way we discovered there had been high exposure to our ads. Also, we get further exposure through things like an article posted on the site that surveys a job fair we took part in last year at Tel Aviv University."

What advice do you have for jobseekers?
"In my opinion it's really important to invest in writing your resume correctly, with attention to details and design, because this provides an initial impression of the candidate, represents him and is supposed to market him in the best possible light.
At Hoshen Synergy the screening process begins with assessing the candidate's ability to express himself in writing, which comes across in the resume."